Like thousands of people stranded at airports during the recent winter vortex, Carolyn and I, too, were frustrated by prolonged delays and 7 cancelled flights. In similar past 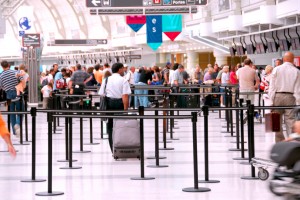 experiences, I’ve witnessed incredibly rude, arrogant, and aggressive behavior at airports and rental car counters.  Adults having tantrums revealed quite a bit about their lack of impulse control and resourcefulness.

However, in this recent storm, with its minus 15 below temperatures in Chicago, there was a marked difference in behavior at the Austin and Dallas airports where we were stranded for three days.  People were calm.  There were no hysterics by adults or kids. There was no pushing or cutting the lines, rather our fellow travelers were friendly and often magnanimous.  I witnessed one gentleman buy a bottle of water for a harried and frightened elderly woman.  Interestingly, there was a level of bemused commonality of a shared experience that bonded us all, albeit, informally.  Weary travelers all, folks introduced themselves to strangers, inquiring about travel plans, ages of kids, residences, and horror stories of families sleeping on cots at the airport.

Bottom line:  I was struck by how universally people chose to behave in a calm, open, and accommodating manner in the face of highly stressful conditions.

When in the midst of some tense discussions with a colleague what mindset might you hold to equally behave in a confident, generous, and authentic manner?

Staying Positive in the Midst of Uncertainty

Is Culture Threatened by Remote Workers?