My six-year-old granddaughter is one of the most courageous people I know. She signed up for her elementary school’s talent show – something I’m not sure I would have done in first grade!  When she told us her talent was as a magician, she swept her arm and bowed. 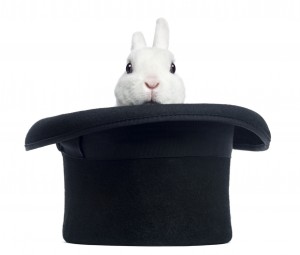 At home, my granddaughter’s technique was solid. Her three-year-old brother thought she was funny, and her parents and friends thought her sleight of hand was, as she said, grrrreat!

With her cape, collapsible cane, and top hat she was confident walking into the show’s tryouts. She was ready. That is, until she looked out into the auditorium. I can only imagine how foreboding the packed house appeared. Suddenly our little girl didn’t feel quite so sure of herself. She did what every frightened child does – she hid her face into her Daddy’s legs.

The performance was three weeks away and she had one more chance before the big night to try again. When asked if she wanted to quit, she said, “NO WAY!” She listened to advice on how to overcome stage fright and put it behind her. She practiced her routine every night. She chose to learn from her fear instead of ignoring it by becoming even more enthusiastic.  When the night of the performance came, she performed flawlessly. Buoyed by her successful performance, she was so pumped she toyed with the audience: “Don’t try this at home; I can do this trick because I’m a trained professional!” As she walked off the stage to thunderous applause, hand-in-hand with her assistant (dad), both were beaming. She was victorious.

When I asked her how she did so well after she got scared, she grinned and replied with the wisdom of a six-year-old, “I just wanted to have fun – not fail. It’s what I wanted. I made the fear disappear and I just did it!”

If a six-year-old girl could courageously shift her focus from overwhelming fear to envisioning rousing success – what could you do?  What could you accomplish if you – just did it?! What steps can you take right now to turn a defeat into a victory?

I’m Grateful for Your Courageousness

Staying Positive in the Midst of Uncertainty